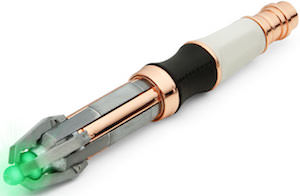 Are you a Doctor Who fan that wants to control it’s TV, Blu-Ray player and more with style?

How about a universal remote control that looks like the Sonic Screwdriver used by the 12th and 11th Doctor?

Just train the Sonic Screwdriver with almost nay IR remote and you can feel like the Doctor while changing channels on your TV.

Lets not wait any longer and just get your 12th Doctor Sonic Screwdriver Universal Remote Control.