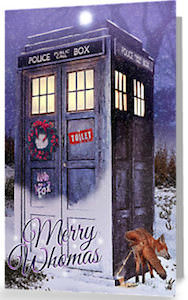 Doctor Who fans would like to get a nice card this holiday season specially one related to the Doctor.

And this card could be it although it is a bit strange.

The card shows the Tardis in a snow covered landscape and it even has a Christmas wreath on the door and the text “Merry Whomas” written over it.

But there are some strange things happening on this card that almost needs the Doctors attention.

So it is a strange card but the Doctor is a bit strange to so it could be the perfect Christmas card for a Doctor Who fan.

Come and have a closer look at this Doctor Who Tardis Christmas Card.